A central herniated disc is a specific diagnostic terminology often seen on MRI reports, describing a bulge or rupture located on the center line of the posterior side of the spinal disc. Central prolapses, also known as medial herniated discs, are inherently no more or less problematic than other types of disc pathologies, including posterolateral herniated discs. However, when central bulges are large, they stand a good chance of influencing the spinal cord and possibly contributing to central spinal stenosis.

Patients write to us constantly asking what particular diagnostic terms mean and a central herniation is always one of the most common queries. Therefore, this report will examine the central herniation diagnosis and provide insight as to what the condition actually entails for affected patients.

What is a Central Herniated Disc?

Central bulging discs are named due to their disposition to bulge at the center of the disc structure. These are always posterior facing bulges unless otherwise classified as anterior central herniations.

Mild central herniations will usually not be blamed for causing any pain or related symptoms, even by doom and gloom practitioners. Moderate central disc bulges are often said to impinge upon the thecal sac or provide a mass effect upon the thecal sac. These herniations are sometimes blamed for causing pain, although in a great number of cases, this is incorrect. Extreme central herniations may impinge upon the actual spinal cord, rarely causing symptoms, or may actually compress the cord, almost universally causing symptoms.

The posterior center of the spinal disc is where the spinal cord and eventually, the cauda equina, reside. In the cervical spine, thoracic spine and upper lumbar spine, a severe central herniation has a chance of affecting the actual spinal cord. Being that the cord ends in the upper to middle lumbar region, lower lumbar herniated discs which bulge centrally can affect the cauda equina.

Central herniations can take the form of broad-based herniations or focal herniations. Neither is inherently worse, nor better, from a symptomatic point of view. It is crucial to remember that most herniated discs, regardless of diagnostic classification, are innocent of enacting any chronic pain, but are often mistakenly identified as the source of symptoms in a great number of back pain sufferers; myself included. 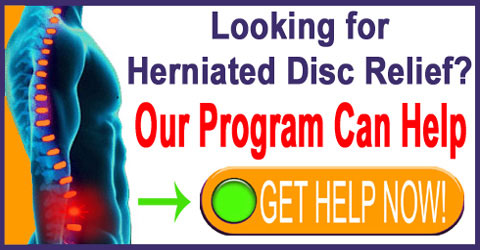 I like to see visitors on pages like this one, since it shows me that these patients are indeed taking an active role in their own care and thoroughly researching their diagnosed condition. Great job. Keep it up.

Do not make the mistake I made for so many years by following my care providers blindly without even knowing nearly enough about the cause of my pain or how to cure it. Learn all you can and become armed with the best back pain treatment anywhere: knowledge.

Remember that there are multitudes of different names and classifications for herniations. While it is good to understand what they mean, it is best to realize the truth of virtually all mild varieties of them: Many are mere scapegoats for pain and nothing more.